Pachinko’s Food Has Layers of Meaning

Pachinko on Apple TV: The series’s food has layers of meaning. Skip to the content
Television

The generations-spanning Apple TV+ drama is fluent in the “unspoken language” of cooking and culture. It’s the 1980s. An ambitious young investment banker named Solomon has returned from New York and cooks with his grandmother, Sunja, in her Osaka kitchen. Their conversation slips between Japanese and Korean as Solomon tears scallions in half and places them in a sizzling pan; Sunja ladles batter over them, and then he cracks an egg over the top. They are making Dongnae pajeon, a recipe from Sunja’s childhood home, Busan. “Your father may think things have changed here for us Koreans,” she tells Solomon, “but I know better.” The pajeon burns and Solomon tries to throw it away, but Sunja scolds him for wasting it. While he’s grown up with plenty, she struggled with scarcity.

Throughout the Apple TV+ adaptation of Min Jin Lee’s novel Pachinko, food represents the transmission and loss of identity within one Korean family—spanning three generations and three countries—and signals differences in class and culture. “Every single dish has a meaning,” says food stylist Ellie Hyewon Lee, who worked with food director Soo Jin Kim, prop master Ellen Freund, and showrunner Soo Hugh to create pivotal scenes in the kitchen and around the table. For viewers like fashion designer Sena Yang, 38, who grew up with many of the same dishes, there’s a “common, unspoken food language” that she shares with the characters as well as her own family.

“That’s the most emotional scene I’ve ever been involved in.” — Pachinko food stylist Ellie Hyewon Lee

Showrunner Hugh says, “When you think about real life, we’re always eating, but I never see that on TV … and we really wanted that to be a part of this.” While working on the script, she took the entire writers room to a cooking class at Banchan Story, a culinary studio in New York, where chef Shin Kim taught them how to make Dongnae pajeon. Prop master Freund learned the recipe in Korea from food director Soo Jin Kim, a respected culinarian who has worked on more than 60 K-dramas along with her daughter and collaborator Ellie Hyewon Lee. “I spent two weeks making pajeon every day so that I could really get it right,” says Freund, who then taught the recipe to Yuh-jung Youn, who plays Sunja as an old woman. (Although Youn was the host of a cooking show called Youn’s Kitchen, she admitted she’s not much of a cook and was worried about getting the regional recipe just right.) “My job,” says Freund, is to “make it easy for the actors to become their characters.” This included collaborating with set decorator Hamish Purdy to outfit Sunja’s Osaka kitchen (filmed in Vancouver, British Columbia) with the two rice cookers, the hot water heater hanging on the wall, the rack of ladles and skimmers, and jars of seasonings ubiquitous in Japan.

Food stylist Lee thinks Sunja’s cooking would have changed over the years after she left Korea (more than five decades at one point in the story) and as the family rose from poverty. But when she makes that pajeon, it connects her to her mother and the home she left in Busan. There’s an implied longing that resonates with Pachinko viewer Kae Yol Lee, 83.* “Getting old, I miss my mother’s home cooking,” he says, remembering the fresh fish that came to their table every day from the nearby Yellow Sea. 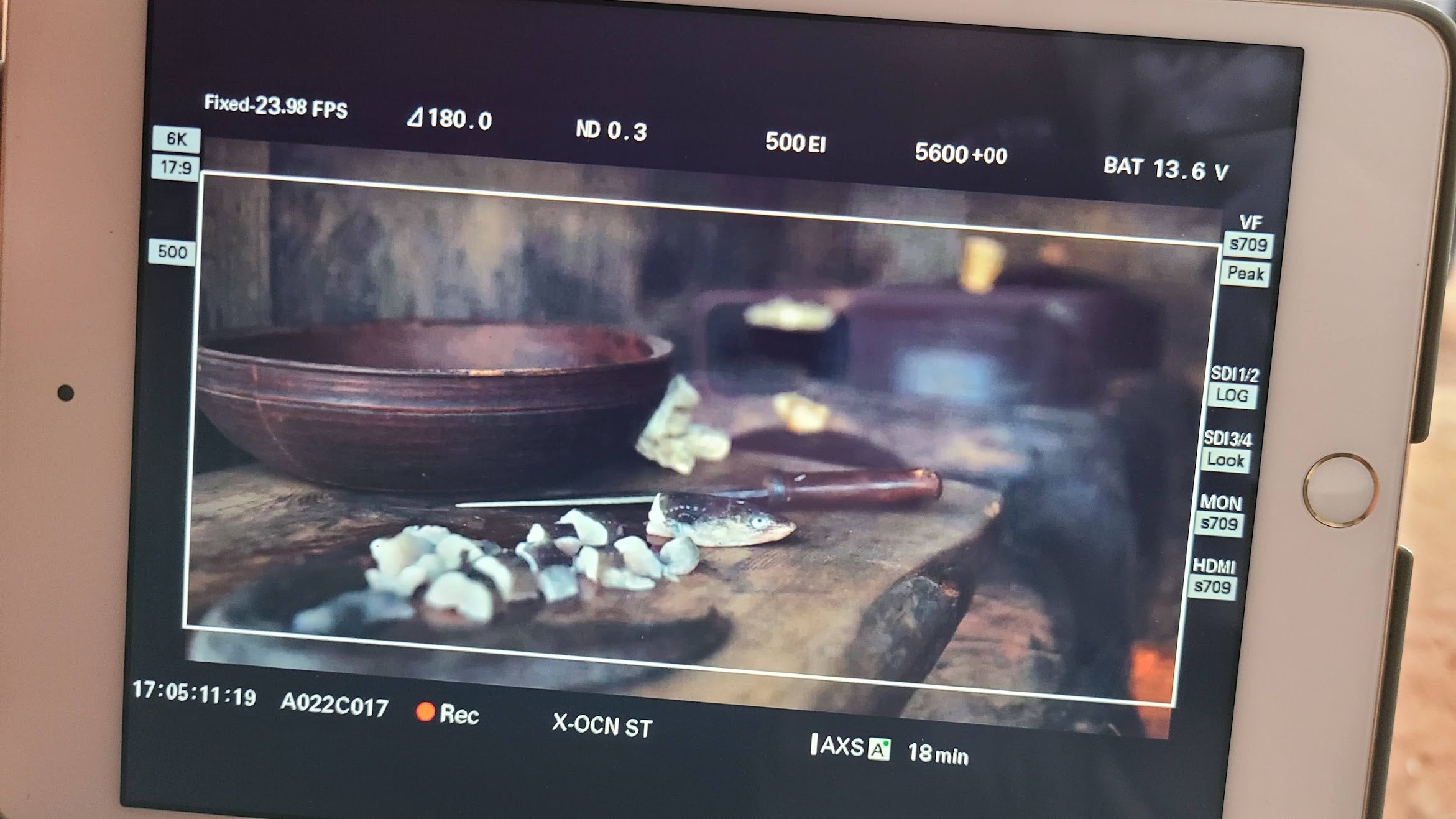 The East Sea is ever-present in images of Sunja’s childhood: the bustling fish market where she shops, the cove where she dives for abalone. To create these scenes of Japanese-occupied Busan, Freund began her research “looking at old prints and woodblocks and pieces of art that would give me a sense of not only what the food was, but … the emotional component of creating meals.” Lee and Kim—the mother-daughter Korean food team—interviewed elders in Busan who remembered subsisting on little more than barley porridge, “just a tiny little bit of barley … with lots of water, that’s it.” White rice was sold, traded, or taken as tax payment by the Japanese, who had their own rice shortages at home.

Before newlywed Sunja departs for Japan, her mother struggles to procure a few bowls of white rice. The camera lingers as she pours the pearls of rice into a large bowl, ladles cool water over it with a gourd, and runs her hands through to wash the rice three times, saving the water. She boils it over the fire, and when she lifts the lid to fluff the cooked rice with a wooden paddle, steam rises to her face.

Watching this scene “gives me such a sense of home,” says Yang. In Seattle, Yang’s mother followed nearly the same steps to make rice in an electric rice cooker every day. “Open the lid and you get that glorious steam … and as you mix it the steam comes up even more, and it’s really fragrant.”

Sunja holds back tears when her mother sets down a brass bowl and uncovers white rice. “It’s a delivery of love from mom,” says Ellie Hyewon Lee, who cried as the scene was filmed. “I am a daughter of my mom, but I am also the mom of my daughters,” she says. “That’s the most emotional scene I’ve ever been involved in.”

To make it come together, Freund took some of the actors to visit kimchi master Ha-youn Lee outside Seoul, where they learned how to build and cook over a fire. Freund sourced props for historical accuracy, but also for emotional impact. “Really, would the rice bowls have been brass? Maybe not, because they probably would have sold the brass because they needed money. But the brass made sense for what we were doing because we needed to cover [the rice] and reveal those important moments.”

For Terri Lee, 49, a designer who grew up in Rochester, New York, talking about Pachinko with her father, Kae Yol Lee, 83, and mother, Soon Ja Lee, 81, who emigrated to the U.S. in 1973, has been poignant. While Terri took white rice for granted—it was always warm in the rice cooker when she came home from school—her parents remember when it was scarce during the Japanese occupation and the 625 War (known to Americans as the Korean War). Kae Yol’s family owned a whole village, including their own rice fields, but he recalls a large portion of their harvest was levied as tribute to the Japanese emperor. What was left for the family they mixed with barley and other grains.* He ate pure white rice only on his birthday. He departed for America in his 30s with an M.D. Ph.D. hoping for greater opportunity, especially for his two daughters.

When Sunja and her new husband board a steamship to Japan in the 1930s, they ride with migrant laborers in the dark, crowded hold where drinking water is scarce, while on an upper deck the wealthy dine on steak—a sign of Japan’s Westernization. When the boat docks in Japan, Sunja rides a streetcar to Ikano and walks into the slum Koreans are confined to, passing vendors selling oden, amazake, and dried fish. Pigs roam the streets.

To believably re-create the atmosphere of prewar Osaka as Sunja arrives, Freund studied old photos and taught each actor playing a vendor how to make a specific food: They are really doing it, though we hardly see the food on screen. The same is true of a 1980s breakfast table where Korean and Japanese dishes mingle. The right foods needed to be there, says Hugh, but “we also want to make sure we don’t fetishize the food.”

One of Hugh’s favorite food moments is a flashback to 1923 Yokohama, when young Hansu and his father grill yakitori on a shichirin, sitting on the grass outside a baseball game. Hansu tries to give his father the first bite, but his father tenderly insists on giving it to Hansu. Hugh says, “So just once again, that is a repeat of the rice scene,” a parent literally giving love to their child—something Hugh remembers her parents doing, too.

In Pachinko, food is a motif signaling not only love, but power. Echoing the scene on the steamship, steak also appears in the 1980s, when Solomon attends a wedding in a Tokyo banquet hall where waiters in baby-blue tuxedos serve a multicourse French dinner. Solomon reminds his childhood friend of something he said when they were young: that Koreans eat like dogs because they bend over their bowls instead of lifting them.

The best of movies, TV, books, music, and more, delivered to your inbox.

Talking about similar experiences, Kae Yol Lee says, “When I was little, making sounds while you’re eating [was] kind of an expression of appreciation.” But now, even in Korea, manners have become more Westernized, he says. For him, Pachinko tells a sad—and familiar—story about loss of identity.

There’s another rice moment when Sunja accompanies Solomon to Tokyo to try to convince an old woman to sell her house (she was not swayed by Solomon’s earlier gift of an expensive square watermelon, the epitome of bubble-era decadence). The woman serves them rice from Korea, a taste of home that brings Sunja to tears. She eats it with a spoon (as Koreans do), while Solomon, oblivious to why this rice is so special, eats it with chopsticks (as he’s learned growing up in Japan).

Terri Lee observes, “You lose your identity every step of the way. You were Korean and then you become Japanese and then your kids become American.” Her father, Kae Yol, says he wonders sometimes what he could have become if he’d stayed in Korea. He had what many would consider a great job, as a scientific researcher, “But now, looking back,” he says, “I became a minority, a useless person in some sense.”

When Sunja finally returns to Korea, she puts her feet in the sea, and she savors dried cuttlefish from the market. But when she searches for her father’s grave in her much-altered hometown, she’s called “one of those” Koreans who left. Watching the scene, Sena Yang says her heart ached for Sunja because she identifies with that feeling: “If I go to Korea, I’m not really Korean. …. And then here, to some people, I’m not really American.”

“I think everyone who’s left their home country feels a lot more connected to the food they used to have at home than when they were actually in the home country,” says Banchan Story’s chef Kim. But with the loss of some traditional culture also comes the creation of new culture. Napa cabbage wasn’t available when the Lees moved to Rochester in 1973, so Soon Ja—who cooked for her family while also working as an early childhood educator—made kimchi with round green cabbage. “That’s my favorite,” says her daughter Terri.

Now that she can find the ingredients in Rochester, Soon Ja Lee makes her mother’s white radish kimchi every spring. Some things have changed. In the scene where Solomon and Sunja make pajeon together, he insists opportunities have improved for the Korean diaspora, while she remains wary of oppression and discrimination. After watching, Lee says, “I agree with Sunja.”