Statements From the Siege of Mariupol, Ukraine 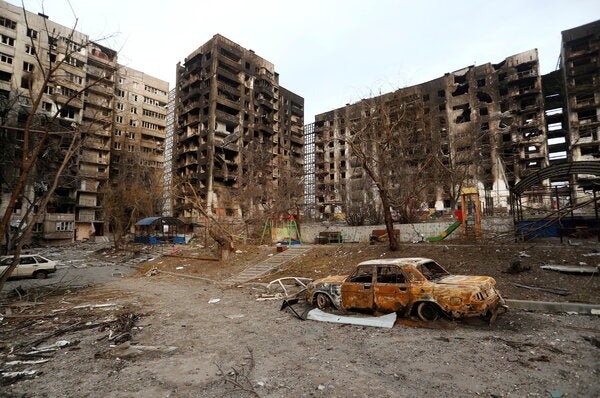 Sign up for the Russia-Ukraine War Briefing.   Every evening, we'll send you a summary of the day's biggest news.

In early March, the Russian Army encircled Mariupol, Ukraine, a southern port city on the Sea of Azov, an extension of the Black Sea. A siege and relentless bombardment followed. Food and water quickly grew scarce, and gas, electricity, internet access and cellphone service became nonexistent.

Early attempts to create humanitarian corridors — to allow civilians to get out of the city and to get food, water and supplies in — failed under Russian shelling. As the siege continued, the dead were covered and left outside because it was too dangerous to collect them. Russians bombed a maternity hospital and a theater where up to 1,000 people were sheltering.

The Red Cross has made repeated attempts in recent days to reach the city, where tens of thousands are reportedly still trapped in increasingly dire conditions.

“Europe has no right to react in silence to what is happening in our Mariupol,” President Volodymyr Zelensky said in a video address on Saturday, translated by his office. “The whole world must react to this humanitarian catastrophe.”

Olena Ivantsiv, Kateryna Iakovlenko and Tetiana Bezruk, journalists from Ukraine, contacted people from Mariupol and asked them to describe their experiences. This is what they said. Their statements have been edited for clarity and length.

I do not miss the lost things, the ruined house. I don’t care that I have a loan on the TV, which I will never watch again. It’s all so mundane and devalued by the war itself. But I miss so very much my special world which Mariupol was for me. The city always had a special smell. During winters, it was a bitter aroma of frozen grapes, which were left on the vine, mixed with a touch of smoke emanating from family houses. During summer, it was filled with the smell of dust settled to the ground by the long-awaited rains. And in the spring … what a beautiful city it was in the spring.

It’s winter in my city, brought by Russian bombs. They did not just bomb my city. They bombed my spring. My life. My past.

And, it turns out, my future too. Because the most difficult question for me now is, “What do I do tomorrow?” I used to have a thousand plans and a million wishes. Now I really wish for only one thing: for Putin to die.

At night I dream of Mariupol. The way I remember it. I walked with my youngest son along the alleys of the City Garden, and he kept asking me, “How many steps to the sea?” and “How many trees in this alley?” Such a pleasant dream and such a painful awakening.

Everyone says: “It’s OK, Anya, we will rebuild. Our city will be even more beautiful than it was before.”

I don’t want a better city. I want what I had. The city where I knew exactly how many steps to the sea and how many trees in the park’s central alley there were.

I want returned what cannot be returned. And this is the tragedy of my life.

Dark, cold room without windows or a glimpse of light. I am on my knees in front of my terrified kids, who are crying and saying that they are afraid to die. I am trying to explain to them that death is not scary, that the most important thing is that we are together. We are in Mariupol, and our building is being shelled. We can hear a plane followed by an explosion, all mixed in with blasts from artillery shelling. The walls and the floor are shaking.

Every explosion takes more civilian lives. The brain is fumbling through thousands of potential escape options, but there are none. Nothing depends on me: My family and I are “being liberated” from Ukraine and our simple, laid-back life. I cannot perceive that we are in the epicenter of the war and every hour of our lives can be the last one. The kids are hungry, and they are asking me for water, but we cannot leave the shelter: The explosions continue.

First, the electricity went out. Then the water disappeared. Money lost its value. Bartering — gasoline for bread, bread for cigarettes, cigarettes for firewood — took its place.

Cold: It’s cold everywhere. There is no heat. It’s the same temperature inside as it is outside.

Shelter: You make it out of anything. After the entire Livoberezhny district was turned into ruins, people took shelter in the theater. They seemed safe. But a Russian bomb from a Russian plane killed many of them.

Security: A word that has lost all its meaning.

Dead people: Everywhere. At first, people tried to bury in mass graves, but when the density of shelling made it impossible, people just lie covered with sheets. Everywhere. 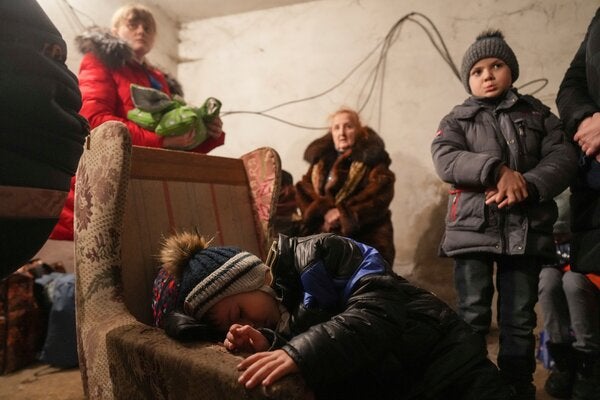 On March 16, my family’s house went aflame like a giant matchstick. We lost our clothes and our belongings. On March 18, we decided to flee the town. My friends had a minibus — heavily damaged but still working. We hastily packed this and that, made “CHILDREN” signs, and in a column of four cars, we set off. Russian tanks were everywhere, and they were moving around the town.

On the turn into the avenue, we came under rifle fire. Bullets hit three car wheels and pierced a fuel tank. Enemy soldiers were not stopped by our signs. With flat tires, we managed to drive to the other town district where the shelling was not so loud. We found a shelter there for a couple of days. On March 21, with our three remaining cars, we drove to the checkpoint through the port. The check was thorough and lasted forever, but finally we were OK to go. We drove toward Berdiansk. We survived.

The scariest moments were in the first days of shelling. One day I heard a loud roar of explosions. I tried to get out to check if my neighbors were all right. I saw only my neighbor’s shoe on the floor and heard him scream, “Don’t come out. Don’t come here.” I thought that someone was killed or he was wounded. Later I realized that the house opposite ours had been shelled. A dead body in front of the building was not removed for more than a week.

We managed to leave on March 15. We drove 170 miles from Mariupol to Zaporizhzhia, around 15 hours. Russians with machine guns stood at the checkpoints checking documents, trunks and the contents of our phones. Fortunately, they let us go.

A few days ago, I saw a video and a picture of my shelled house. The Russian “liberators” freed me from my home and my job. They destroyed my city. I don’t know whether my friends, neighbors, colleagues and students are still alive: Some of them were sheltering in the basements of their buildings; some of them were in the theater.

Near us, on the western side, there was a sports complex, Ilyichevets. There was a period when shelling from this part of the city became less frequent, so we decided that we could go in that direction. We walked more than four miles between the houses and avoided the open area. When we started to leave Mariupol, someone (possibly Russians) started shooting at us. The explosions were nearby, but none of us were hurt. We got out. A little farther, we saw destroyed military equipment and a checkpoint. We were fired upon again. At the very exit from the city on the highway, a man who was leaving Mariupol managed to put us in his car. Almost immediately, as soon as we left the city, a shell hit the dormitory where we’d been staying. 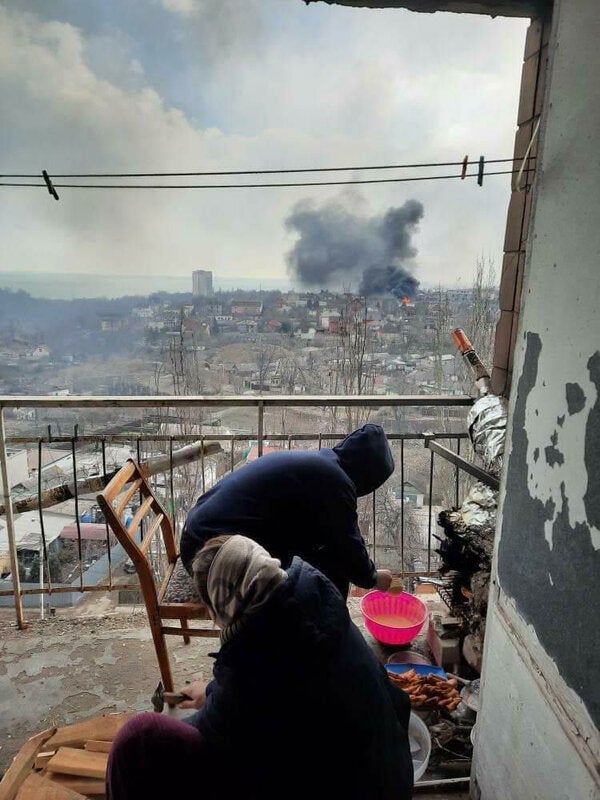 Cooking on a balcony of a student dormitory during a break from shelling. Credit... Egor Zaharov

On the night of March 7 very close and very loud shelling started. We ran to the cellar, where we also hid some of our neighbors and their children. At some point, we heard a piercingly loud whistling sound followed by a loud blow. That was the night our home was destroyed. The cellar — our safe place — damaged. We saw blood on the children’s faces. We felt the horror of digging out the entrance to our grandmother’s room.

We gave up all hope of being rescued. We had been abandoned by everyone. We got devastating news from the nearby hospital after my wife’s uncle was badly injured by the shelling: There was nothing they could do to save him, so he bled out, and we buried him in the backyard.

Whenever we managed to get out, we saw a postapocalyptic ghost town: ruined buildings, garbage, wreckage and hungry homeless dogs abandoned by their owners. People broke into the local school to steal food from the canteen and tore off wooden floors and windowsills to use for fire to cook.

On March 13, we saw soldiers constructing an antitank roadblock on our street. That’s when we knew we had to flee, no matter how dangerous it might be.

A friend of mine died. Two shells struck his apartment while he was in the kitchen and killed him. His wife, son, father and mother-in-law were in the next room. His wife received shrapnel wounds to the head, and so did his mother-in-law. But his 82-year-old father was unharmed. They ran out of the apartment just before it caught fire, and then they could not go back there anymore. But my friend, Vitya, will stay in that apartment forever.

And we went to get water, stepping over the bodies of people who went to get water the day before. Finally, we found running water in one of the buildings. Many people were already there, and we could not bring too much of it with us because we had to carry it a long way. But we went for water every day, and every day we looked at new bodies lying on the road.

After March 2 we lost light, water and then gas. The city was plunged into darkness, but the worst things were the lack of communication with the relatives and all radio stations being jammed by the enemy. On March 6, a massive artillery shelling rained down on our entire district. All houses were damaged. They said that 10 people died. One of the shells hit the apartment of my friend who lived on the last, third floor of the building: It went through the roof and got stuck in her floor. From that day on, I was very afraid to go up to my apartment. Life in the basement began on March 6. There were 15 of us, including two children of 6 and 16 years of age. We spent two weeks down there, visiting the apartment once or twice a day. Food was cooked on the fire near the building entrance: We built a small brick oven, started a fire and took turns cooking. The same arrangements took place at every building entrance, all happening under a heavy cannonade. And then the airplanes started dropping bombs. We learned the sounds of air raids and knew what was flying and where. We knew when we could cook or when we had to escape to the basement. It was cold and dark in the basement. We started to run out of candles and made oil lamps. There was constant darkness, day and night.

These statements were recorded, transcribed and translated from the Russian and Ukrainian by Olena Ivantsiv, Kateryna Iakovlenko and Tetiana Bezruk, journalists from Ukraine.

The Times is committed to publishing a diversity of letters to the editor. We’d like to hear what you think about this or any of our articles. Here are some tips . And here’s our email: letters@nytimes.com .