What do giant veg growers eat on Christmas Day? 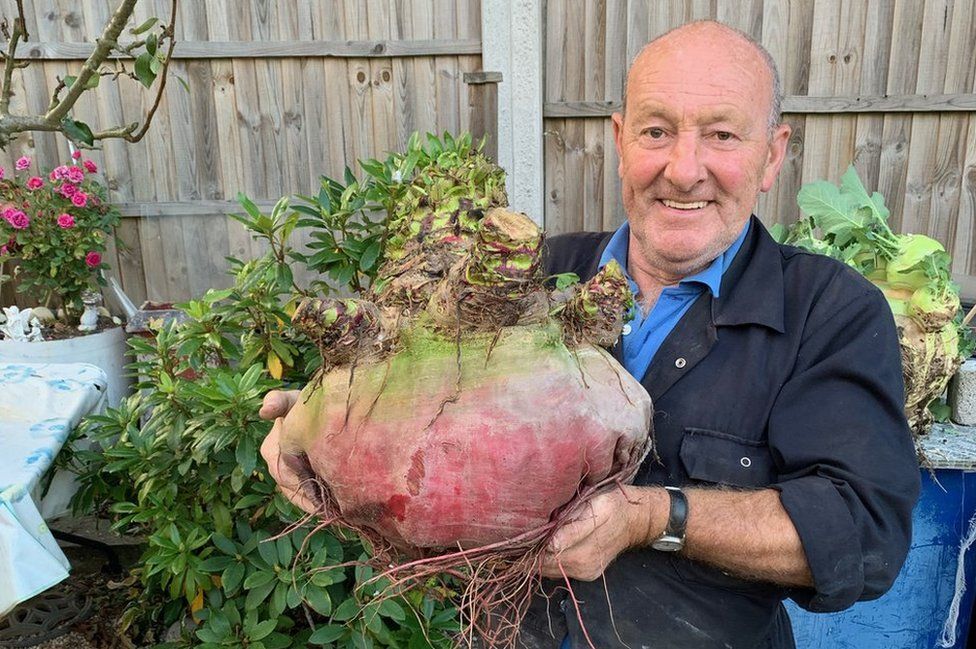 Do gardeners who have spent their lives cultivating some of the world's most colossal carrots, stupendous sprouts or oversized onions enjoy huge helpings of trimmings alongside their Christmas turkey? BBC News meets three gargantuan growers to find out.

'I once had all my Christmas presents in the greenhouse' 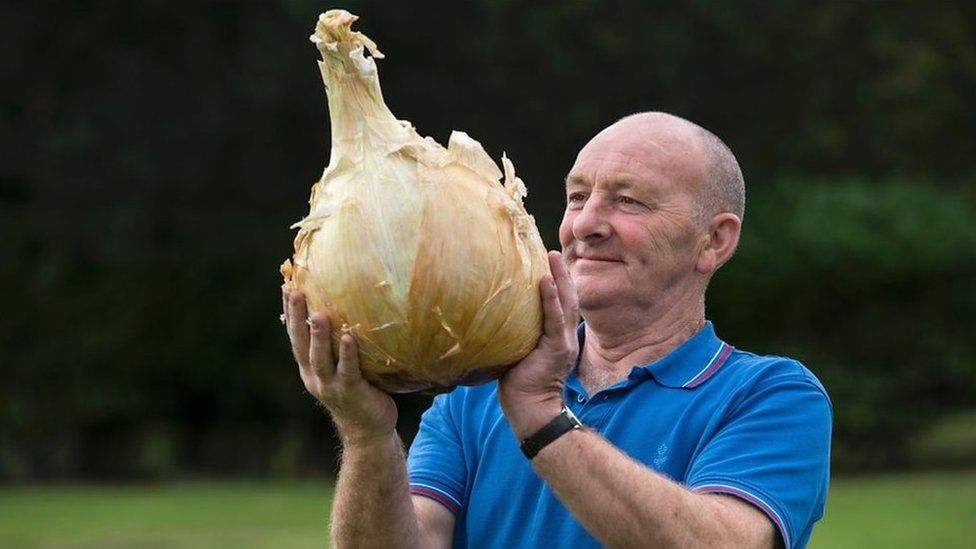 Joe Atherton is not keen on onions. Or, for that matter, parsnips.

All of this is slightly unfortunate, given that Joe is the current world record holder for growing the heftiest versions of eight different vegetables, including the longest leek, the heaviest broad bean and the longest carrot, parsnip, beetroot, radish, salsify and turnip.

However Joe, from Mansfield Woodhouse in Nottinghamshire, does put some of his victorious veg to good use on Christmas day.

"We have a traditional Christmas dinner: turkey - although I don't like stuffing - potatoes, carrots and swede," he says.

"We eat our own runner beans and freeze them so they are fresh at Christmas."

Some giant vegetables, Joe says, do not translate well on to the dinner plate but there are exceptions.

"The giant leeks and the giant onions - you can eat those," he says.

"Once the shows are over, we chop up the ones we have left and freeze them for winter meals. We had a lovely sausage casserole the other night, made with our own leeks." 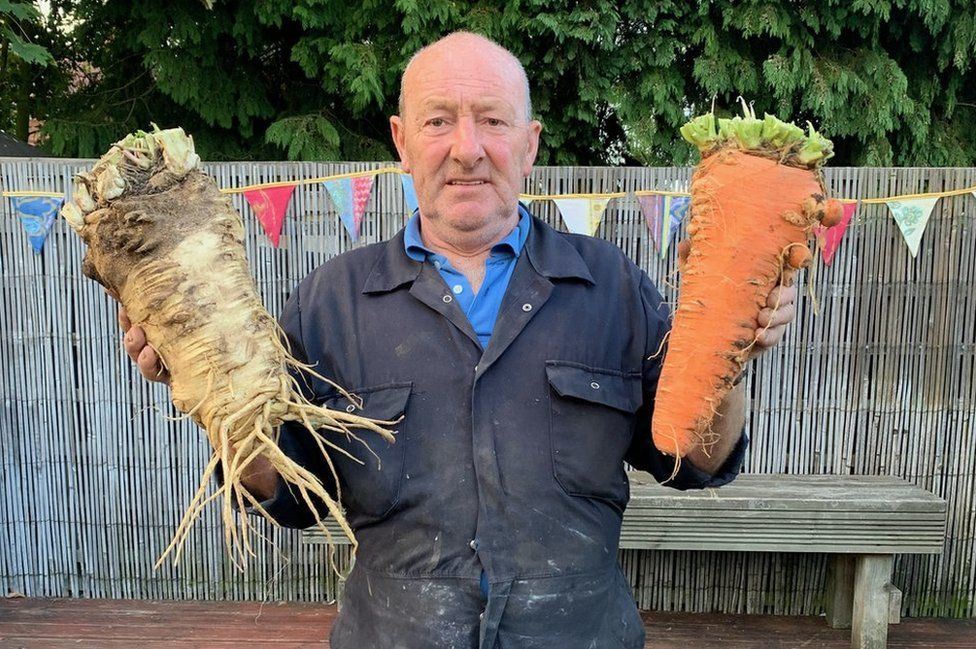 Joe says his vegetables lend themselves to "quite a few portions"

The benefits of being a giant veg grower include being able to invite plenty of people around to share the spoils.

"They make quite a few portions," says Joe. "There are going to be 16 of us round this Christmas and there are enough runner beans and leeks to feed everybody.

"Carmel, my wife, mainly does the cooking. She uses the fruit from our garden to make lovely cakes and jellies and our apples to make an apple sauce." 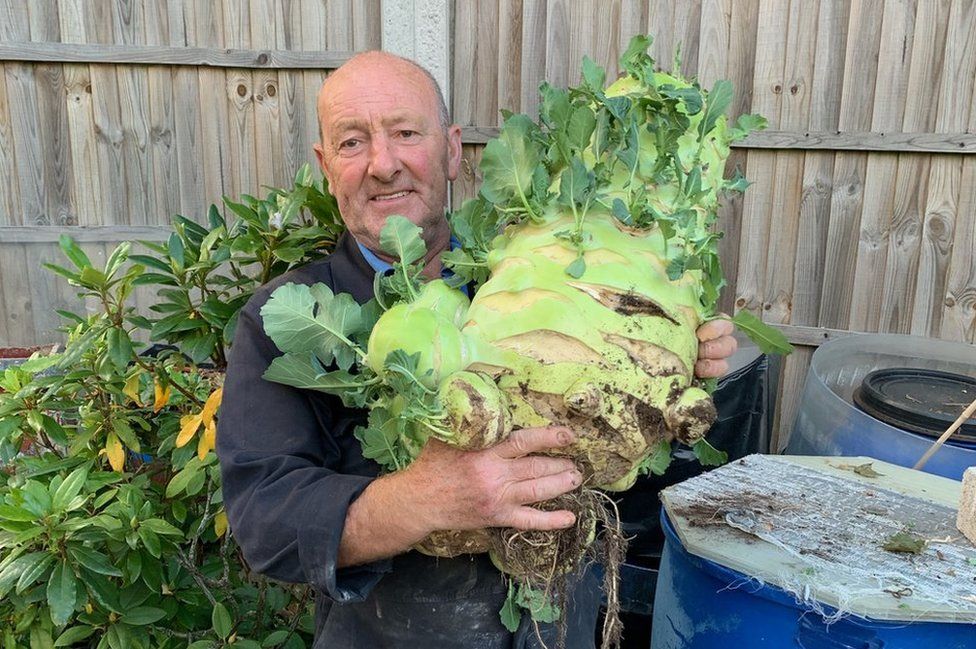 Joe has already started cultivating his crops for next year

And while many of us are relaxing indoors over Christmas, we should spare a thought for Britain's legions of dedicated growers for whom there is rarely such a thing as a day off.

Joe has already started cultivating what he hopes will be next year's show-stopping onion crop.

"They are growing under artificial lights, as well as natural daylight to give them the best start," he says.

"I do sometimes nip out to have a check on the garden on Christmas Day. After dinner, normally, when there's not a lot on telly.

"I once had all my Christmas presents left in the greenhouse - Santa must have known that's where I'd be."

'There's an abundance of earthy flavour' 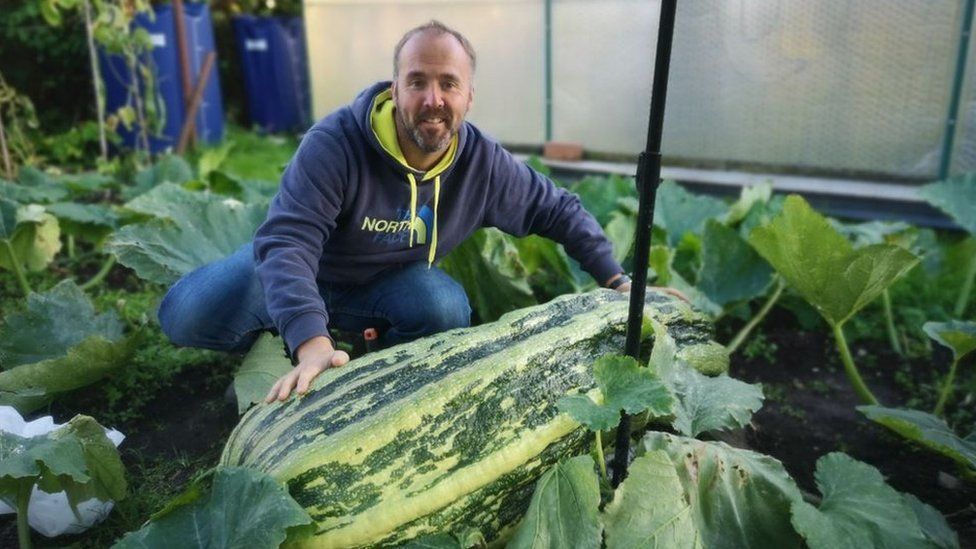 Kevin Fortey shares his giant vegetables with his local community

Kevin Fortey's giant marrows have become famous in his community in Cwmbran, Wales, for the number of people each one is able to feed.

Kevin shares them with friends and neighbours and even works with a local primary school and a councillor to make up parcels for foodbanks.

"Each parcel of food had a slice of marrow on top," he says.

"We used to compost them because people said they were inedible but we are slowly dispelling that myth.

"One of my friends' mums made a marrow we gave her into a beautiful curry." 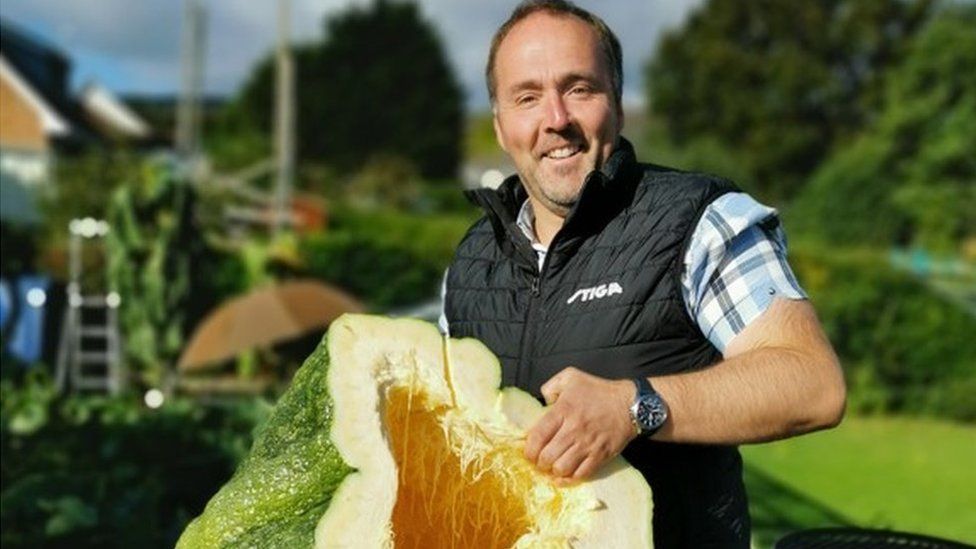 This year, the unusually mild weather has left Kevin with a 68kg (150lb) marrow still in the ground which he plans to harvest for Christmas.

"We'll probably use it to make zucchini bread, from a recipe an American friend sent me," he says.

He will be cooking for seven family members over Christmas, including his mum, his brother's family and his teenage son.

"I'm going to be using our vegetables - our parsnips, carrots and sprouts," he says.

"They're not all giants, although the parsnip will need a bit of cooking as it's quite big.

"I'm planning to stir-fry the sprouts with cashew nuts and honey. We'll be serving them with an assortment of meats - turkey, chicken and beef." 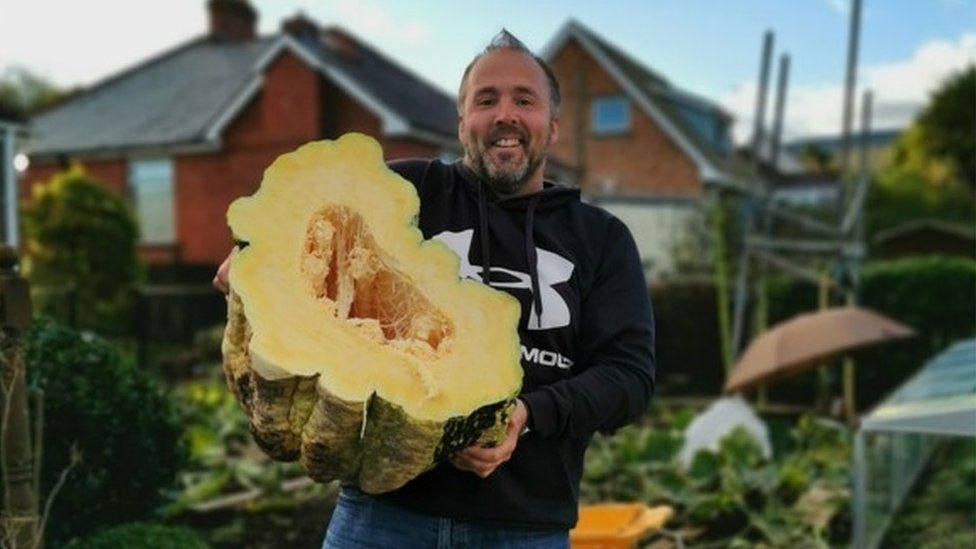 Kevin grows his giant produce in his back garden veg patch, which measures about a quarter of an acre.

"There's an abundance of earthy flavour.

"It's really satisfying watching my niece, nephew and son enjoying them.

"And we know how they have been grown, picked and harvested and that they are all organic." 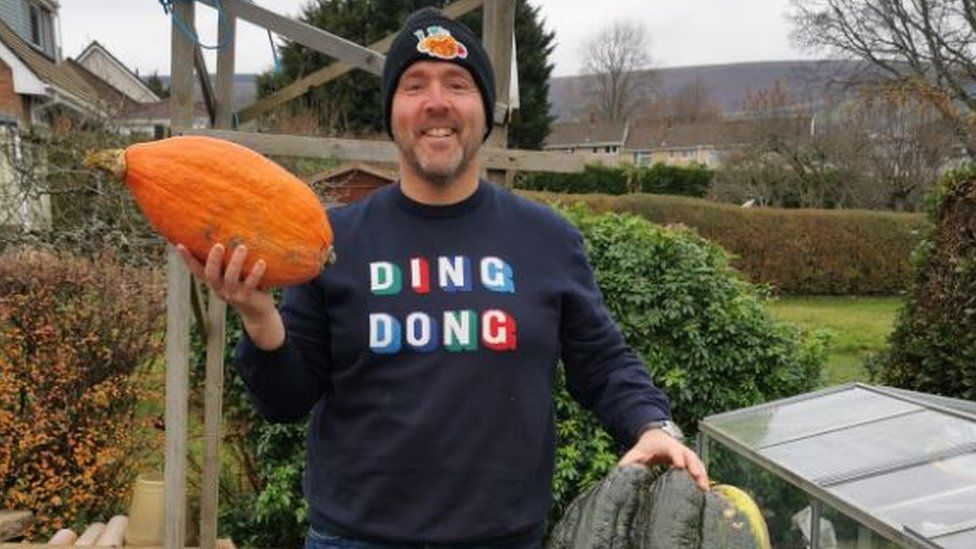 Kevin is the current Guinness world record holder for the largest beetroot - just shy of 24kg (52lbs) - and has previous held records for his chillies and radishes.

He is currently waiting on the confirmation of a further two records.

In 2014, he set up a giant veg community on Facebook that has followers from all over the world.

He is passionate about encouraging other families to cultivate fruit and vegetables on whatever scale they can manage.

"In these uncertain times, one of the benefits of growing your own is that you don't have to go shopping," he says.

"You can just step outside in the fresh air and harvest your dinner."

'There is no break over Christmas' 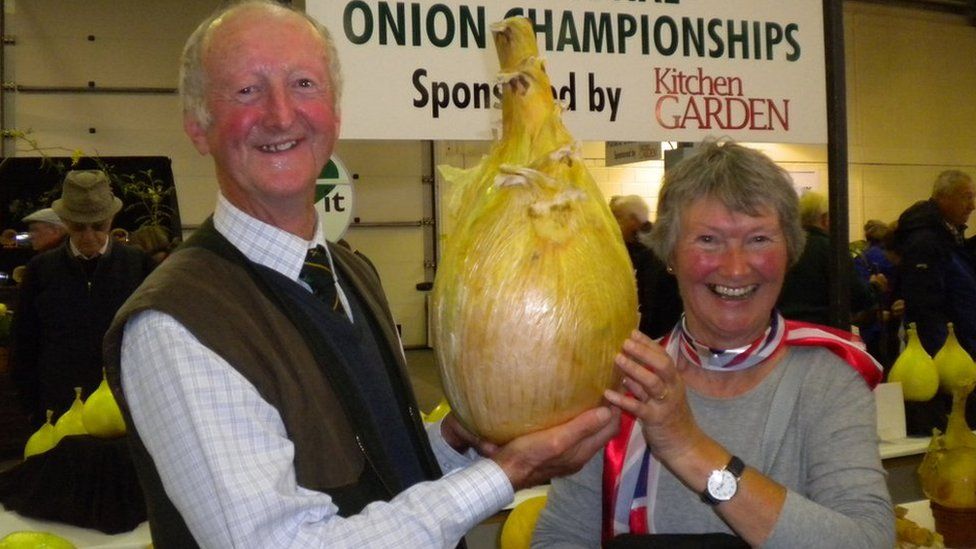 Although Peter Glazebrook, from Halam in Nottinghamshire, eats surplus giant vegetables when they are young, he concentrates on growing other, more normal-sized fruit and vegetables for Christmas dinner.

His wife uses home-grown fruit, such as apples, damsons and plums, for festive crumbles, jams and chutneys.

They also make the most of their vegetable plot in their large garden to provide their own potatoes, onions and greens for their Christmas meal.

"We have turkey with all the trimmings including homemade Christmas pudding containing our own apples," says Peter.

"We have red cabbage as a vegetable at Christmas, cooked with apples, onions and a few sultanas.

"This year, due to Covid, there's only the two of us to eat it so there will be plenty to go around on Boxing Day."

Peter's interest in vegetable growing began at the age of 10.

Since 1996, he has broken 21 giant veg records and is the current holder of three - heaviest potato, cauliflower and aubergine.

"My proudest achievement was breaking the heaviest onion record twice," he says. 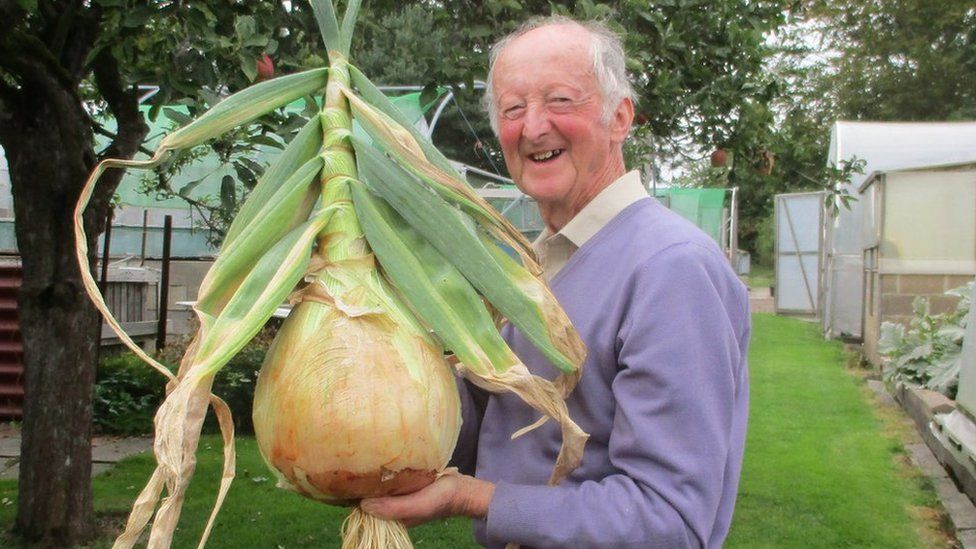 While Peter's winning produce may not end up being eaten, it does not go to waste.

"After being shown, some vegetables are saved for their seeds," he says.

"Many are too old and end up on the compost heap."

Since he has retired, Peter says gardening has become more like a vocation. 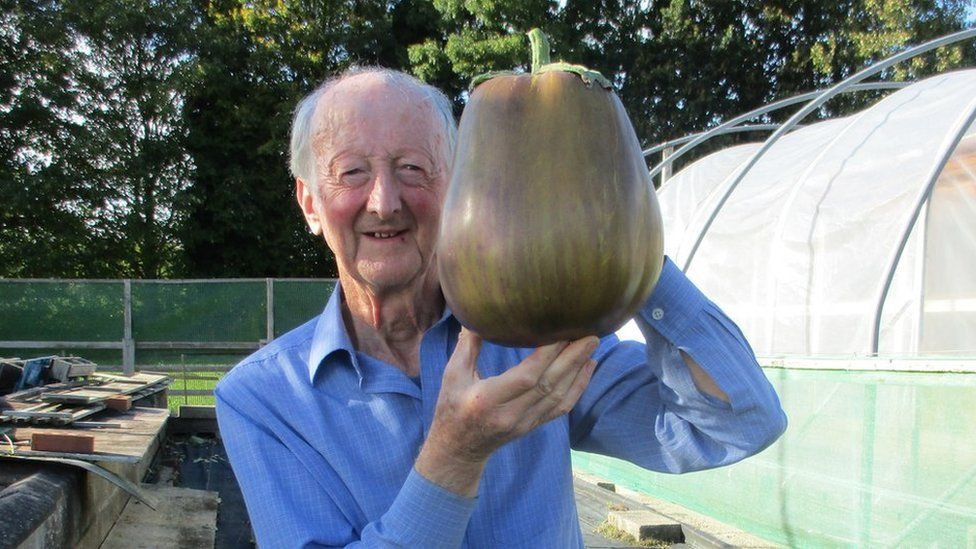 Like many dedicated gardeners, Peter works year-round on his plot

"It is dawn until dusk with my spare time all year round," he says.

"There is no break [over Christmas] but we normally have a week's holiday in October after the last show, before we start again."

More on this story